If you cannot have the best, go for second best. I was not able to breastfeed Green Girl, so I started pumping my milk for her, and in my case, it ended up being not that terrible of a problem to have.

Why is it that so many will tell you how giving birth can be painful but no one ever warns you about how hard breastfeeding can be? What to feed your newborn is a baby topic you can think about while pregnant. It is not one of those unexpected questions you stumble upon as you practice being new parents with a newborn in tow. So you and Soon-to-be Dad have time to discuss and agree on the subject if you don’t already have an opinion even from before expecting. Yet, knowing that breastfeeding does not always “just happen” because you opted for it would, in our case, have given us some time to look deeper into the other options and prepare for a smoother last minute change of plan. Well… we all survived in the end despite a bumpy ride. But still, it is only after we faced the issue and I started talking about it that I realized how many breastfeeding-willing Moms had gone through the same challenges. Yet very few breastfeeding stats are available for pointers (low rates could suggest, among other things, that it is not that easy to do and maintain), let alone pumping rates.

The CDC or Centers for Disease Control and Prevention has offered some of the rare national trends in breastfeeding data since 2007 via its Breastfeeding Report Card. The national trend shows steady improvements, especially in the 3 month and 6 month exclusively breastfeeding rates (+5pts and +4 pts respectively over the period) but they are coming off of a rather low base (see below numbers), and the latest 2011 national rates show there is still plenty of room for improvements, especially when compared to the 2020 targets: 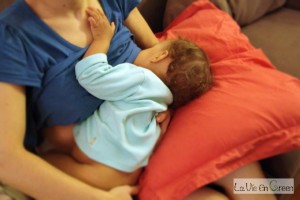 I always knew I wanted to breastfeed. In an either-or type of situation, when possible I usually choose the option closest to nature. So it was all set, I was going to give maternal milk to my baby, for as long as possible. What is not to like about breastfeeding? Custom-made by nature, so I’d assume perfectly adapted to Baby’s needs, available on demand, no waiting time, the right amount at the right temperature, no spillage, a comfortable position in a warm environment for Baby, and let’s not forget, it is free. It creates no waste, requires no water or consumption of anything else, a very green way to feed your baby indeed… And so I did give Green Girl maternal milk. Just not the way I intended to.

To this day, and while still effortlessfully breastfeeding her little sister Green Baby (for 21 months and going strong), I do not know what went wrong the first time around with Green Girl. Maybe my eagerness (borderline anxiousness) to do it created a mental block her and I just could not go past? Whatever the reason(s), we just were never able to sync up and get a good, working experience. The kind you see in all the pictures of Moms with nursing babies. She would latch on for a minute and then slip out the next, sucking on milkless nipples. I tried and tried, using every position I read or heard about, but without success. 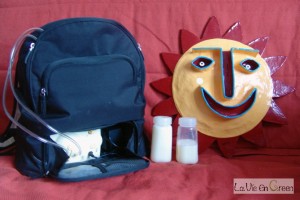 One of the first few baby items we purchased (and the best, to this day) was an electric double pump. Being on maternity leave, I knew I would need it as soon as I would be back at work so I can pump during the day the quantity of milk Green Girl would need for the following day at daycare. Soon after giving birth, I was also well advised by the hospital’s lactation consultants to start pumping to stimulate milk production (latching on was an issue from the beginning and Green Girl was losing more weight than wanted so supply could have been the root cause), which I kept on doing once we got back home. So I was familiar with using an electric pump early on. I did not realize, at the time, how pumping would save the day (that is, our maternal milk feeding plan), and in a big way!

Nursing and more specifically latching on was challenging from the get go, but with quality help at my hospital bedside, we managed to get the position right and feed her the anyway tiny quantities she needed in her first few days. But back at home, the struggles around latching kept on going and I was all alone dealing with it. Green Daddy was really good with props and had a hand at positioning pillows perfectly, but he was working. Alone, I just could not replicate any of these lifesaving moves for a successful feeding. So I kept on trying, going through long painful feedings, hoping that she would at least get what she needed out of them. And inevitably, cracked nipples (read bleeding nipples) quickly settled down for good. When the pain would be too strong to bear, I would resort to pumping and giving Green Girl my milk via a bottle, taking as long as a one-week-long hiatus between trials, to give my breasts time to start healing. My motivation was intact, I really wanted to preserve that privileged bond with her and I was always ready to try again, even before complete healing. Note that the cracks were “compatible” with pumping, I felt no pain expressing milk.

Green Girl and I probably went through three or four back-and-forth of trying and taking a healing break attempts, without any improvements. I also got help twice, at home, from a lactation consultant who expertly positioned Green Girl’s mouth the right way so she could latch on, but again, once alone, her and I could never re-do it, or long enough.

I remember, during a painful middle of the night feeding on December 31st, 2008, having an epiphany about pumping, realizing that it was, except for the bond breastfeeding creates, the second best option to feed Green Girl with my milk, and I finally accepted not to try the “boob way” anymore. I developed a real love for my pump, up until this day, because not only it kept my milk production going, but it worked perfectly and effortlessly. And it also indirectly got Green Girl used to the bottle early on, which built the ground for a smooth transition from home to daycare when I went back to work four and a half months after giving birth. Even the, for some, annoying humming noise that comes with pumping became music to my ears…

So if there are any takeaways from my experience, it is to go with what is best for you and your baby, and if it does not work the way you planned it, never underestimate second best! In my case, I tried breastfeeding and even though I gave it all I had, it did not work. But pumping did and it happened to be the perfect way to use maternal milk while slowly and easily preparing Green Girl to move from home to daycare. I too had become a pro at pumping by the time I went back to work, which allowed me to fully concentrate on the “being back in the office” portion of the transition, knowing that my milk production needs were taken care of. The whole traumatic experience of eagerly wanting to breastfeed and watching it completely fail was a blessing in disguise as it opened the way to pumping, which made the really hard transition of leaving my baby at daycare and going back to work, more manageable for both Green Girl and I.

What feeding choices did you plan to make for your child(ren)? Were you able to go through with them? If breastfeeding, did you encounter any difficulty and if you did, were you able to find appropriate help?

You may want to check out yummymummystore.com, a great resource for all your breastfeeding needs (pumping material, maternity essentials, books, DVDs, breast care, postpartum care, you need it, you name it, they have it). If you are in the area, their NYC store offers top-notch advice on the whole nursing experience, how to and what pumping accessories you need, as well as many classes and events ranging from prenatal yoga and breastfeeding classes, to expectant moms support groups, weekly breastfeeding support groups, childbirth preparation classes, lactation consultants and doula meetings.

Too many pills in pregnancy