Common concerns for breastfeeding moms often include, among other things, nighttime feedings and lack of sleep. Bottle fed babies typically sleep longer nights sooner than breastfed babies, who tend to prefer smaller but more frequent feedings. Well, who said you have to be awake when baby needs to eat at night? Just like we always hear about how scary and painful (or scarily painful) giving birth can be, we may hear, and fear, that choosing to breastfeed means not getting anymore sleep. And so I thought, until I tried co-sleeping.

After a less than successful first breastfeeding experience with Green Girl, I was more than ever determined to yet again, give it my best when Green Baby came along. And just like I never understood what went wrong the first time, I have no idea why this time around, breastfeeding worked like a charm. Green Baby latched on right away as if she had been practicing in the womb, and she did not let go until fully satiated. Go figure. I was over the moon, and tired after a complicated delivery, and you know, carrying a growing baby for 9 months. The “sleep a lot while you can” advice all future parents hear at one point or another during pregnancy, is either coming from childless friends, or… sarcastic friends with kids! Good theory, just not applicable. The closer you get to term, the shorter your nights, and during those last weeks, everything you do is more exhausting than usual (putting on your shoes, anyone?). So when liberation comes and you finally deliver your baby, there is both an emotional and physical relief… until you realize you now have a 24/7 hungry newborn in your hands. 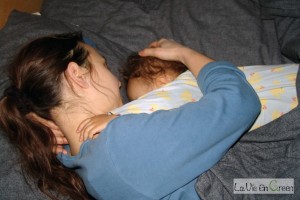 So yes, with breastfeeding (meaning a higher likelihood of sleep deprivation) comes fair sleep worry. As Green Baby turned out to be an eating enthusiast, that became a bit of my nighttime reality. At first, being awake at night did not bother me, I was still on cloud nine from being able to nurse and fully enjoying the bond it was creating between us. When Green Baby would cry, I would just switch on the light, lift her out of her bassinet (right against our bed), sit back against my bed head and start nursing her until she is done and asleep. Then I would put her back in her bassinet, switch off the light, and go back to sleep myself. Several times a night. I did that for 2 months. And then I started to be tired and happened to read again about co-sleeping, or bed-sharing, or sleep-sharing, or whatever you call that very controversial, judgement attracting topic where the “safety” and “bonding” posses oppose each other (check this City of Milwaukee Health Department Nov. 2011 campaign against co-sleeping)…

I was in no way new to the concept since back when Green Girl and I were trying to make that infamous latch happen, we, among other things, had tried the sleeping position: both on our side facing each other as we were laying down in bed. Without success. But even after we switched for good to maternal milk in a bottle, Green Girl would fall asleep in my or Green Dad’s arms with her evening bottle, and would wake up instantly if we tried to put her in her crib. Thus most of the time, she spent the night, or part of it, sleeping in our bed.

With that under my belt, I was not worried about the danger of accidental suffocation or strangulation often linked to co-sleeping because my experience and my instincts told me that even in my sleep, I somehow just know what to do and how to do it when my baby is near me. Yet, I did not think of it as a nighttime feeding position. I do not know why it took me so long to piece it all together (other than fearing she would gag from drinking in that position!), but when I realized that sitting was not a pre-requisite to nurse a baby at night, I started bringing Green Baby in bed as soon as she would wake up, and she showed me she could not care less about the position as long as flowing milk was involved. Soon after, I stopped switching on the light, and then barely woke up as I brought her to the breast at night. We both adapted, gratefully (for me) and gracefully (for her), to our new routine. In a matter of days, I got my sleep time back on track and the few seconds of interruption here and there needed to lift my tee shirt or move her from one side to the other became pretty much unconscious moves.

Now 21 months old, Green Baby usually feeds once or twice at night, sometimes more. Most of the time, she falls asleep after her last evening feeding while I read her and big sis Green Girl their bedtime stories in their bedroom. I then transfer her down in her crib where she starts the night, until she calls for a “milk fix”, usually early morning, which is when co-sleeping starts. The other scenario is she does not fall asleep in her bedroom after evening feeding, but in ours, with us when we go to bed. She falls asleep nursing, stays for the rest of the night and just eats whenever she wants. The scenario we end up with often depends on how much nap time she had during the day.

The U.S. Consumer Product Safety Commission (CPSC) warns parents not to place their infants to sleep in adult beds, stating that the practice puts babies at risk of suffocation and strangulation. And the American Academy of Pediatrics (AAP) recommends the practice of room-sharing with parents without bed-sharing. Besides suffocation (mostly in the early days though), the other big concern for anti co-sleepers is that it may be hard to get babies to sleep in their bed later on. I can only speak from my experience but in our case, when Green Girl stopped taking her evening bottle of milk (around 2yo), we moved her nighttime routine (reading, cuddling, tucking her in…) from the living room to her bedroom. That and the “big-girl-bed” she got were enough incentives for her to happily move on to her new “big-girl” life. She sometimes pays us a visit at night, but it is usually early morning with few hours left to sleep, but then, yes, that is a case of the 4 of us all in one bed! Sweet memories I am sure we’ll cherish and regret sooner than we think… As for Green Baby, given that she shows no interest in stopping breastfeeding right now, I guess we’ll see how the transfer goes. Things can change fast with young children. 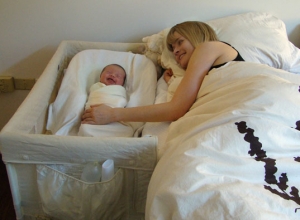 About the other elements of the co-sleeping debate, it seems to me that most of the concerns can be relieved or solved with common sense discipline and caution. Like not going to bed after ingesting alcohol/medications/drugs (am I really writing this?), not covering the baby’s head with a cover, placing the baby away from pillows, making sure there is no gaps for Baby to fall into or get stuck in … And I see much value in the benefits associated with the practice: more nighttime sleep for parents and baby, relaxed baby from close contact with parents, smooth, longer breastfeeding experience. And if you nurse at night and long a good un-interrupted night sleep but co-sleeping does not work for you, then using an arm’s reach co-sleeper bassinet for your baby might be your way to that result. For me, co-sleeping increased both amount and quality of my sleep while giving Green Baby what she wants in the smoothest, non disruptive way possible for everyone involved; and as a breastfeeding mother, I support it. Actually, nursing my baby at night is the biggest plus of them all.

What do you think of co-sleeping: do you see more positive or more negative to it? How did you come to the conclusion to do it, or not, with your children?

The most toxic thing in your house?