A successful harvest depends on insect pollinators, mainly bees, for 1 of every 3 bites of food eaten worldwide. That’s most of the planet’s Top 100 food crops, or 70% of the crops providing 90% of human food. 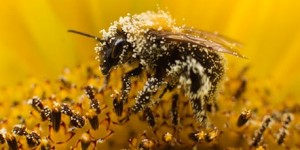 Pollination is the process by which plant pollen is transferred from the male reproductive organs to the female reproductive organs, to form seeds. In flowering plants, pollen is often carried over by the wind or by insects. Apples, almonds, summer berries, alfalfa, guar bean (used in all kinds of products), citrus fruits…  Apis Mellifera, or bees, are the “moveable force” riding in trucks from farm to farm to keep commercial agriculture productive. Insect pollinators contribute $29 billion to the U.S. agricultural economy, with honeybees’ share over $19 billion of that.

Humans began domesticating bees 4,500 years ago in Egypt and there have been multiple colony decline episodes before with parasites, Varroa and tracheal mites still major hives killers today. But beyond the U.S., this pollinator crisis also affects Europe and parts of Asia. It arose in 2006 and owes its Colony Collapse Disorder (CCD) name to fast and massive bee losses of over 30% on average, up to 90% in some cases. Bees are flying away, not coming back, leaving empty boxes behind, except for a live queen. There is no bee corpses to tell the tale. The latest data from the 2012-2013 U.S. winter reports an average loss of 45% of hives (+ 78% vs prior year). For reference, a 15% loss is considered acceptable (as in sustainable). Since 2006 an estimated 10 million beehives worth about $200 each have been lost, costing beekeepers some $2 billion. There are now 2.5 million honeybee colonies in the U.S., down from 6 million 60 years ago.

Neither beekeepers nor the economy can keep losing 30% or more honey bees per year. But this is not a one cause to one effect situation and debates are ongoing to pinpoint the issues and ways to solve them:

In 2007, scientists identified viruses and parasitic microbes that may have impaired bees’ ability to produce proteins protecting them against infection. Recent work reveals higher loads of pathogens in the guts of bees from collapsed colonies vs healthy ones, making viral infections a likely culprit. Scientists hence wondered if an environmental factor could cause bees’ vulnerability to viral attack.

Early 2012, severals studies implicated neonicotinoids, a class of widely-used pesticides approved in the 1990s as less toxic to humans than organochlorine (think DDT, the first modern and most known persistent organic pollutant, banned in 1972) and organophosphate pesticides. Since they are used in a “systemic” manner (applied as seed treatments so they stay with the plant as it grows and spread throughout all of it including the nectar and pollen), the absence of spray was deemed great to reduce human exposure. But their environmental and ecosystem impacts are heavy: published research then showed their presence in rivers and streams and residues in numerous foods.

Bees exposed to them via most major commercial crops (canola, corn, cotton, sugar beet, sunflower, and many vegetable and fruit crops) exhibited a reduced growth rate, produced fewer queens, or had impaired navigation and food-gathering abilities. Although the commonly encountered doses may not be directly lethal to bees, sublethal doses could indirectly contribute to CCD by rendering hives weak and lethargic, never able to thrive and unable to survive the winter due to their immune-suppressed state.

Debates still rage over whether, when properly applied, these chemicals can be safe to pollinators. Pesticides’ manufacturers like Bayer CropScience, Syngenta, and their trade association CropLife America think so. But entomologists’ recent studies found two neonicotinoids in the nectar and pollen of squash to which the pesticides were applied as directed. Samples of bee-collected pollen also typically contain residues from numerous pesticides.

At the very least, bee exposure to neonicotinoids seems to open the door to other killers (gut parasites, mites) even though this is not a clear-cut case: neonicotinoids are widely used in Australia and Canada where varroa mites are not a problem…

In the U.S., there are 18,000 agriculture chemicals containing over 1,200 active ingredients registered for use, making it impossible to account for all the effects of many possible quantities and combinations. And the use of adjuvants (inert ingredients used to boost the effectiveness of pesticides), from impairing bees’ smelling and navigation abilities to killing bee larvae outright, could well be more harmful than chemicals themselves! But formulas are companies’ proprietary undisclosed information (the EPA only screens active ingredients when reviewing for registration) so there is no way to independently test their toxicity. Even though some products are nearly 100%  adjuvants, they are considered safe until proven otherwise.

Honey bees need habitat, that’s any floral source with good nutrition, not wheat, corn, or soy, crops covering over 60% of U.S. farmland. Bees also need to feed on their own honey, a natural potent mix of detoxifying compounds that provides immunity to disease. But because honey means money, it is entirely sold off for profit, leaving bees with high-fructose corn syrup, a cheap and likely GMO-laden substitute. Nutritional deficiencies ensue, further compromising their resilience to pesticides and pathogens.

Beekeepers, entomologists and anyone investigating colony collapse disorder CCD agree that the cause is likely a combination of factors. Exposure to neonicotinoids likely weakens bees’ immune system, already affected by nutritional deficiencies from not feeding on honey. Add to it the disappearing foraging habitat: due to the increase in monocultures, it requires trucking bees from place to place due to higher demand but fewer bees available to pollinate on site. These trips affect bees even further. Some even bring up climate change and its brutal effects on local weather. All these stress factors open wide the door to fungal and viral intruders, as well as the dreaded Varroa mites, all likely explanations to today’s crisis. The diseases affecting immune-suppressed bees quickly evolve to resist to farmers’ attempts at protecting their bees, to the point that not one commercial product against Varroa mites works consistently. And honeybees are among the most robust pollinators. Native insects such as bumblebees, stingless bees and flies may well be in worse shape, we just don’t know them as well. It’s a catch 22 where the causes feed the effects and vice-versa, with no end in sight.

The main focus remains on neonicotinoids though. In the U.S., neonicotinoids are currently used on about 95% of corn and canola crops, the majority of cotton, sorghum, sugar beets, and about half of all soybeans. They cover about 75% of the acres devoted to crops in the U.S.: fruit and vegetable crops including apples, cherries, peaches, oranges, berries, leafy greens, tomatoes, and potatoes, also applied to cereal grains, rice, nuts and wine grapes. They are widely used on landscaping plants and urban trees and in numerous home garden pest-control products. All places frequented by bees, domesticated and wild.

The gravity of the situation was underscored on April 29 in Europe when the European Commission acknowledged the danger of CCD to the world’s food supply and the need of a safety measure. Due to the “unnacceptable risk to bees”, a 2-year suspension of three neonicotinoids used on seeds and, grains and plants attractive to bees (corn, oilseed rape, sunflowers…) was voted and passed, beginning December 1. France and Germany, with a partial ban already in effect prove that despite the chemical industry’s warnings, a ban did not lead back to older, more harmful pesticides but rather to a successful use of natural pest predators and crop rotation.

Last March, a coalition of beekeepers and environmental interest groups filed a lawsuit against the U.S. Environmental Protection Agency, alleging failure to protect bees and the crops they pollinate by rushing neoniconitnoids to market with inadequate review. The EPA is actively working with beekeepers, growers, pesticide manufacturers and others to reevaluate the safety of neonicotinoids, but will need another five years to complete the review! Their only accomplishment so far is a joint report with the USDA acknowledging a possible risk from sublethal doses and the need for further research… Online petitions (here and here) have been started, urging the EPA to act before 2018 and follow suit on suspending neonicotinoids use on flowering crops as a safety precaution. 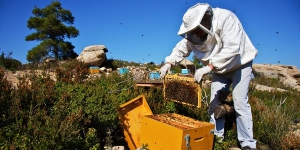 Actions can also be taken at an individual level: we can plant a garden of vegetables and plenty of bee-friendly flowers, or even become a backyard beekeeper (information and resources here and here) to provide wild bee populations, also declining, new habitats. By purchasing local and/or organic produce and eating primarily unrefined plant foods, we can vote with our wallet and refuse to support the largely genetically modified crops (corn, canola, sugar beets…) that neonicotinoids are primarily used on.

The telling case of California’s almond orchards. With losses of 40 to 50% or more bees last winter, beekeepers were scrambling as they prepared to transport their commercial bee hives to the fertilizing of California’s almond trees, the largest U.S. pollinator event. The state’s 800,000 acres almond orchards typically require 1.6 million domesticated bee colonies to pollinate the flowering trees and produce California’s largest overseas agricultural export. It is only because other crops don’t need as many bees that this year, almond growers were able to pollinate their crop… 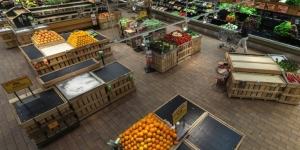 At this pace, the bee industry will soon dwindle away. No, we would not starve without bees but we would lose a lot of good, healthy foods, from cherries and broccoli to onions and almonds. Or we would pay exorbitant costs for farmers to use other, less efficient pollination techniques to replace natural pollinators. 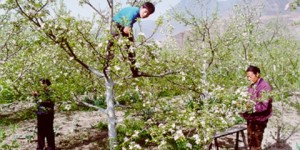 China already adopted human pollination, by hand. Let’s not forget that bee health tells us a lot about environmental health, thus about our own well-being… Einstein may have said: “Without bees, men will last only four years.” Bees arrived on Earth 60 million years before men, are we going to let them disappear when we now know of several ways to help them regain their ground? We need to decide how we want to live.

Credit photos (top to bottom): A bee collecting pollen by Michael Kooren-Reuters, A beekeeper pulls a section of honeycomb from a hive by Gianluca Colla-National Geographic, Store shelves with and then without bees by PRNewsFoto-Whole Foods Market, Hand pollination in China by chinadialogue.net