Way to start 2014 for anti Genetically Modified Organisms (GMOs) consumers and activists! General Mills announced on January 2 that Original Cheerios, one of America’s favorite breakfast cereal brands, will now be GMO free. Or will it be?

A national poll showed that over 90% of the population support mandatory GMO labeling by law so that manufacturers would have to disclose the use of GMOs in food products. This topic has gained momentum in 2013 and the US population has learned more about GMOs along the way. It wasn’t enough against months of massive spending by the Big Food industry ($25MM, vs $8.4MM for the pro labeling in the Nov. 2013 campaign), as two successive state labeling attempts (California’s Prop 37 in November 2012 and Washington’s I-522 in November 2013) failed. Yet, could this move by General Mills be a first industry acknowledgment that the population’s wish will eventually prevail?

Here are the takeaways from the company’s PR statement: 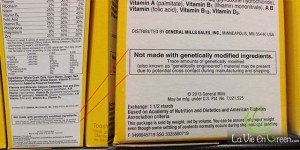 1- No more corn and beet GMOs- The small amount of corn starch used in cooking will now come only from non-GMO corn and the “just one gram of sugar per serving for taste” will now only be non-GMO pure cane sugar, as opposed to GMO beet sugar.

2- Only Original Cheerios is ridden from GMO ingredients- All 13 other Cheerios varieties, like the popular Honey Nuts and Whole Grains, remain unchanged (read, with GMOs).

3- GMO free… or not?- Added under the ingredient list on the side of the box (also on the opposite side), the new text states: “Not Made With Genetically Modified Ingredients. Trace amounts of GMO ingredients could be present due to contamination during the manufacturing process.” Since there is no official non GMO certification, and because General Mills’ plants also manufacture the other with GMO Cheerios, there will be risks of contamination. In clear, there is NO sure way to say the box of cereals you may purchase is 100% GMO-free.

4- No debut date for the new label- “On shelf soon” is all General Mills said about the switch date… A random store check showed the old boxes were on shelf on Jan. 4 in one store, but the new ones were up at another retailer on Jan. 8. They’re most likely going through their inventories to prepare for a phased-in (or soft) launch, unsurprisingly proving that profit comes first. Before any health concerns anyway.

Now, what are the learnings from this PR stunt by General Mills?

This was a very well played and publicized move by General Mills. A complete one too, with good, bad and muddy elements requiring clarification and perspective.

The good: This is a positive outcome to the anti GMO movement’s repeated pushes on the Big Food Industry

But it is also a win for General Mills…

Now for the not-so-good news, mostly for us consumers…

With all this, should we feel safe buying these “new” cereals? Probably not… General Mills “seems” to have finally acknowledged the persistent and growing call to remove GMOs, but making this small commitment to their biggest (as in easiest to modify) Cheerios variety was not that hard and it happened because they’ll for sure rip up more benefits than it cost them in the first place. And that includes the much valued historic prize of being first to market with a mainstream highly processed cereal recipe that is GMO free. Watch all other US Big Food CPG manufacturers catch up in the coming months…

Still not convinced? Then, besides the other Cheerios recipes, what about ridding all of their other highly processed cereal brands, like Lucky Charms (need I say more?), Cinnamon Toast Crunch, Reeses Puffs, Chex Corn… ? Also keep in mind that with or without GMO, Cheerios are and remain highly processed food products in a box. And that will not make history with our health.

Now for a positive ending, and because that is where the real opportunity is, let’s hope that anti GMO activists can effectively amplify the change and durably leverage it with General Mills’ competitors.

What do You think? Buying? Not buying?

What are Genetically Modified Organisms, or GMO foods?

Halloween and the rest of the year, the right candy way!